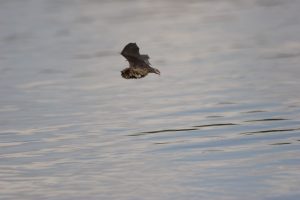 Daubenton’s bat is a medium-sized species. It has a steady flight, often within a few centimetresof the water surface and is reminiscent of a small hovercraft.

Daubenton’s bats usually feed within about 6km of the roost, but have been recorded following canals for up to 10km (at speeds of up to 25kph). They usually take insects from close to the water and have even been seen taking prey directly from the water surface, using their large feet as a gaff or the tail membrane as a scoop.

In England and Wales, the majority of known summer colonies are in humid, more or less underground sites near water. These may be tunnels or bridges over canals and rivers, or in caves, mines and cellars. They are only occasionally found in buildings, usually old stone structures such as moated castles and waterworks. In Scotland, colonies more frequently occur in buildings. Tree-holes are probably much more widely used than the recorded evidence suggests and one individual was even observed entering a small hole in an earthen roadside bank.

They have also bred in bat boxes. Summer colonies are often quite noisy throughout the day, especially at sites where they are close to human activity. A variety of temporary night roosts are used, often in trees or tunnels close to the feeding sites. Daubenton’s bats have been found clustering with pipistrelle, noctule, Natterer’s and brown long-eared bats.

Many Daubenton’s bats hibernate in caves, mines and other underground sites. In extensive tunnel systems with large numbers of bats present, Daubenton’s are often the most numerous species. They enter these winter sites in October, but only small numbers are present in the early part of winter. Numbers can increase dramatically towards the end of January and February, and individuals often remain at these sites until the end of March or even early April. Most are found in the warmer more stable environment within a site, although they can be found close to the entrance, particularly later in winter.

Although usually solitary, small groups of three or four are not uncommon. Individuals are often lodged in tight crevices; many are barely visible in such conditions and it is likely that others are not visible at all. Daubenton’s bats may also hide among rocks and scree on the floor of caves and tunnels making finding them very difficult; it is likely that the numbers counted in many sites are a considerable

Mating takes place in the autumn and active males will continue to seek out and mate with females throughout the winter. Maternity roosts are occupied from late spring and sometimes until October. Young bats are suckled for several weeks and are fully weaned and able to forage for themselves at 6 to 8 weeks. Males or non-breeding females may aggregate during the summer to form their own communal roosts, but sometimes join maternity colonies. The average colony size is between 20 to 50 bats (up to 200). Daubenton’s bats can live for up to 22 years.

Daubenton’s bat calls range from 35 to 85kHz and are loudest at 45 to 50kHz. On a bat detector the calls are heard as a machinegun like series of regular clicks for bursts of 5 to 10 seconds.

Daubenton’s bat is fairly widespread up to northern Scotland, in Ireland and on the Isle of Man. Despite severe loss of and damage to wetlands and waterways, Daubenton’s bat seems to be increasing in parts of its range. This may in part be associated with the increasing number of artificial water bodies, including gravel pits, reservoirs and flooded quarries. Also a low level of pollution may encourage a more consistent supply of certain insects.

However, the loss of diversity of aquatic insects has a detrimental effect on other animals and without very careful pollution controls would also affect Daubenton’s bats. The removal of waterside trees and disturbance to hibernation sites could also lead to a decline in this species.