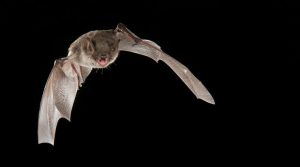 The Whiskered bat is a Myotis very similar to Brandt’s bat and the two species were only separated in 1970. Both are small species with somewhat shaggy fur – Brandt’s bat is slightly larger than whiskered bat. The two species are most reliably separated by differences in dentition and penis shape. Other distinguishing features are thought to include tragus shape and claw length.

Whiskered bats emerge within half an hour of sunset and probably remain active throughout much of the night. They
have a fast and fluttering flight, to a height of 20 metres, generally level with occasional swoops. They glide briefly,
especially when feeding in the canopy. They frequently fly along a regular route over or alongside a hedgerow or
woodland edge.

Whiskered bats are regularly found in buildings, though colonies are more commonly found in the north and west.
They are found in all types of houses including some modern ones, but particularly in older buildings with stone walls and slate roofs. It is a crevice dweller, often roosting until hanging tiles, above soffits, in cavity walls and under
ridge tiles.

Droppings frequently accumulate in the roof below the ridge and especially below the favoured roost sites, but not particularly at gable ends or on chimneys. Colonies of whiskered and Brandt’s bats may use separate parts of the same roof and may also roost with pipistrelles or longeared bats. They do roost in trees and churches, and have been known to use bat boxes.

In winter whiskered bats are regularly found hibernating in caves and tunnels, almost always in small numbers – it
is uncertain where the majority of them hibernate. They are usually found in cold areas close to the entrance, but
occasionally roost in the warmer interior. They may choose more humid conditions than Brandt’s bat, and more often hang exposed. Males may stay at the hibernation sites until well into May.

Moths, other small insects and spiders. Studies have indicated that whiskered bats have more flexible foraging habits than Brandt’s bats.

Mating usually takes place in autumn, but has been observed in all winter months. Adult females form maternity colonies in the summer, giving birth to their single young in June or early July. The baby is fed solely on its mother’s milk: by three weeks it can fly and by six weeks it can forage for itself.

Some females reach sexual maturity at three months (in their first autumn) but the majority do not mate until their second autumn.

Whiskered bats echolocate between 32kHz and 89kHz, sounding loudest at 45kHz. Their calls sound like dry
clicks (similar to Daubenton’s but not as regular and often slower); they are sometimes mistaken for pipistrelles but their frequency range is much wider.

Whiskered bat is thought to be slightly more common and widespread than Brandt’s bat. It is found throughout England and Wales and even in southern Scotland and throughout Ireland. They are vulnerable to the effects of modern agricultural practices and decline of woodland, which result in loss of suitable feeding habitats and hollow trees for roosting. They are susceptible to pesticides, especially those used as remedial timber treatment chemicals.

Disturbance and vandalism of their hibernation sites (caves and tunnels) is an additional threat.