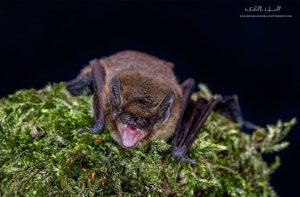 Pipistrelles are the most common and widespread of all British bat species. There are three very similar species found in West Yorkshire, the Common, Soprano and Nathusius’ Pipistrelles. Pipistrelles are the bats that you are most likely to see. They appear fast and jerky in flight as they dodge about pursuing small insects which the bats catch and eat on the wing. A single pipistrelle can consume up to 3,000 insects in one night!

The two common pipistrelle species found in the UK, the common and soprano pipistrelle, were only identified as separate species in the 1990s. The two species look very similar and often the easiest way to tell them apart is from the frequency of their echolocation calls.

Common pipistrelles feed in a wide range of habitats comprising woodland, hedgerows, grassland, farmland, suburban and also urban areas. They generally emerge from their roost around 20 minutes after sunset and fly 2-10m above ground level searching for their insect prey, which they catch and eat on the wing by ‘aerial hawking’.

In winter common pipistrelles are found singly or in small numbers in crevices of buildings and trees, and also in bat boxes. They are often found in relatively exposed locations and rarely underground.

Feeds mainly on a wide range of small flies as well as the aquatic midges and mosquitos.

Male bats usually roost singly or in small groups through the summer months. During the main mating period from July to early September, males defend individual territories as mating roosts, attracting females by making repeated ‘songflights’ around their roost and singing social calls.

Sounds produced by common pipistrelles are above the range of human hearing with the exception of social calls that may be heard by children and some adults with good hearing. With a bat detector (heterodyne) the echolocation calls can be picked up between about 45 and 70kHz.

The calls sound like a series of clicks towards the top of this range, turning into ‘wetter’ slaps with the deepest sounding slap being heard at about 45kHz, the peak intensity of the call.

The common pipistrelle is widely distributed across the UK and its distribution appears to extend further north than that of soprano pipistrelle.

Along with the common pipistrelle it is one of Britain’s commonest bat species. Populations of pipistrelles have declined dramatically in the last few decades. This is at least partly as a result of modern agricultural practices, although common pipistrelle populations have started showing signs of recovery in recent years. Their reliance on buildings for roosting makes them vulnerable to building renovations, exclusion and toxic remedial timber treatment chemicals.