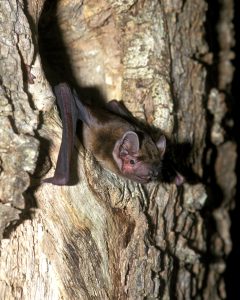 The noctule bat is one of the largest British species and is usually the first bat to appear in the evening, sometimes even before sunset. Noctules have broad brown ears and a distinctive mushroom-shaped tragus.

Noctules have a characteristic powerful, direct flight on narrow pointed wings. They fly in the open, often well above tree-top level, with repeated steep dives when chasing insects. Noctule bats can fly at 50 kph. Most food is caught on the wing and eaten in flight but occasionally prey is taken from the ground and in suburban areas noctules are attracted to street lamps to feed on moths. During spring noctules will feed mainly on smaller insects such as midges, changing their diet to take beetles and moths later in the season. They forage mainly at dusk for up to two hours and for about half an hour at dawn. They are known to fly over 10km from roost to feeding areas.

Noctule bats are primarily tree dwellers and live mainly in rot holes and woodpecker holes. They occur rarely in buildings; most noctule roosts in buildings are only gathering roosts, the colonies moving off at the end of May and early June. The bats produce loud characteristic metallic chirping sounds so that noctule colonies can be heard up to 200-300m away on hot days.

Noctule bats hibernate mainly in trees or rock fissures and hollows, but have also been found in bat boxes, buildings and other man-made structures in winter. They sometimes form large mixed-sex winter aggregations of up to 1,000 on mainland Europe, but the group sizes are smaller in the UK. Noctules have been observed feeding at any time in winter if conditions are suitable but most can survive successfully without feeding for nearly four months and can tolerate external temperatures as low as -7°C.

During the summer, male noctules are solitary or form small bachelor groups. A single male establishes a mating roost during late summer, usually in a tree hole, staying for several weeks and defending his roost against other sexually mature males.

He emits a series of shrill mating calls from the roost entrance or during flight and produces a strong odour, attracting a harem usually of four or five (but up to 20) females, which stay with the male for 1 or 2 days. In April noctule bats begin to form mixed-sex colonies and can be found in tree holes, buildings and bat boxes.

Such colonies often break up in late spring and smaller maternity colonies are found in trees, rarely in buildings and bridges. The young are
born in late June or July. Females usually have one young, but twins are sometimes recorded. For 3 to 4 weeks the young are suckled solely on their mother’s milk, and they are fully weaned and able to forage for themselves within 6 weeks.

The maternity colonies frequently change roosts, mothers carrying the smaller young between roosts during lactation. The young are left in crèches while the mothers go off to feed. Some females become sexually mature in their first autumn but many do not mate until their second year. Males participate in mating from the end of their first year.

Noctules’ calls can be heard by some adults and children. The calls range from 20 to 45kHz and peak at 25kHz. On a bat detector a characteristic ‘chip chop’ with occasional clicks can be heard during feeding.

The noctule is still a relatively widespread species in much of England, Wales and to south-west Scotland, but has become scarce in some areas of intensive agriculture. The noctule is absent from Ireland. The noctule bat has declined in Britain, owing to modern intensive agricultural practices resulting in the loss of suitable feeding habitat such as permanent pasture and woodland edge/hedgerows rich in invertebrate fauna. Intensive management and loss of suitable trees for roosting is a major factor.