An introduction to Bats!

An introduction to Bats!

The Bat is the only true flying mammal in the world and the latin name for bats “Chiroptera” literally means “Hand-wing”.

Other mammals such as flying squirrels actually don’t fly but glide. Bats are like all mammals, they give birth to live young and suckle their infants until they are ready to feed for themselves. 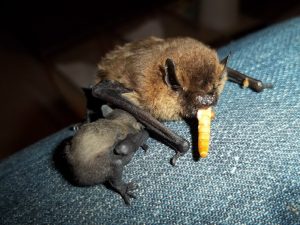 This bat is not only having its own dinner but feeding her pup too! From Bat Conservation Trust website, Copyright Steve Allen

Bats are present all across the globe, the only place they are not found is in Antarctica!

Bats can live (for their size) a long time. Bats that do live a long time, some up to 30 years, could possibly be as a result of minimal threats from predators.

Bats use echolocation to orient themselves. The old saying “As blind as a bat” couldn’t be further from the truth. In fact Bats have good eyesight which is especially good in low light, but they also use echolocation. The bat can make loud, ultrasonic sound waves that it emits from its mouth and using complex structures in its ear it can hear these sounds being reflected back at it. As the sounds come back quicker the bat knows it is closer to an object or prey. When a bat catches its prey a volley of rapid sounding clicks can be heard similar to a raspberry!

The other wonderful adaptation bats have is their sperm has long viability. This means that the bat can take part in mating prior to hibernation and the female can store the live sperm for several months ready for fertilisation in the spring. Some bats however use a different approach and allow the egg to be fertilised, put on hold over the winter and they continue the pregnancy in the spring when the time is the most optimal for raising young due to abundant food sources.

Next General Anatomy of the bat

Earlier this week WYBG were involved in a rehab and release of #daubentons bats in the #templenewsam area of #leeds.

You can read about it here: https://www.westyorkshirebats.org.uk/temple-newsam-rehab-and-release/

We have lots of freely downloadable resources available from our website, including these three posters. Take a look here: https://www.bats.org.uk/resources/publications-and-leaflets/leaflets

#beatrix is a late juvenile #pipistrelle found in #halifax. She was found by a 9 year old girl who has a #passion for helping #wildlife. She found her #grounded, carefully got her into a box and rushed to her #mum asking her to call the #batpeople (@_BCT_) for help.